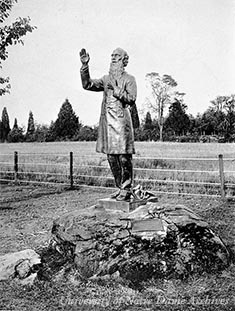 A statue depicting Fr. Corby delivering his absolution was erected at Gettysburg in 1910. It stands on the rock upon which he stood to give the absolution. The monument is one of only two chaplains to be immortalized with a battlefield monument at Gettysburg. (The other is of Rev. Horatio Howell, who was likely mistaken for a combatant and shot dead during the first day of the battle.)

A year later, on Memorial Day 1911, a replica of Corby’s Gettysburg monument was unveiled at Notre Dame. It stands upon a rock brought from the Gettysburg battlefield and sits outside Corby Hall, where Holy Cross religious live. It is the only monument to Notre Dame’s and the Congregation of Holy Cross’s contribution to the Civil War on campus. Corby would serve two terms as University president, 1866-1872 and 1877-1881.