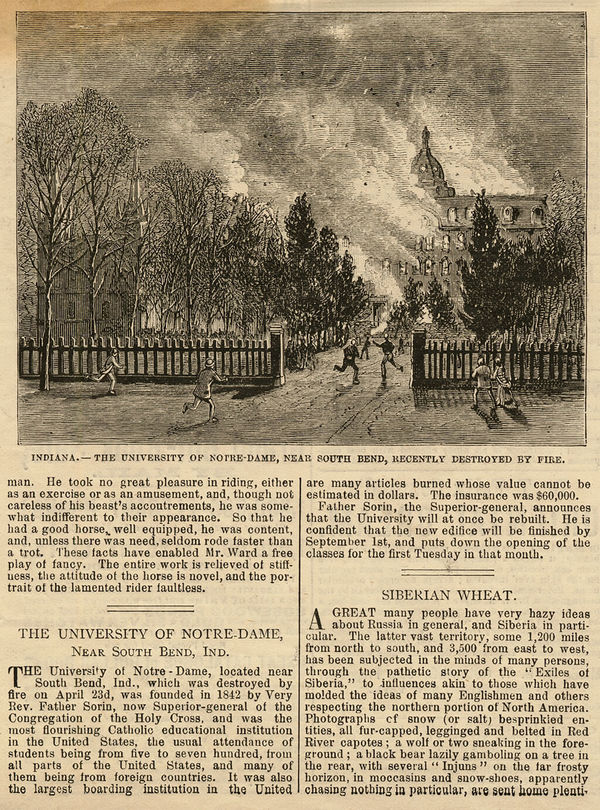 On the morning of April 23, 1879, the worst fire ever to strike the campus broke out on the roof of the east wing of the six-story main building and burned it to the ground. In those days, the main building contained classrooms, dorm rooms, the dining hall, the library, the laboratory, museum, and administrative offices – essentially the whole campus. A bucket brigade of students and locals tried to save the building but gave up when its white dome collapsed and a one-ton statue of Mary on top crashed down into the center of the building, igniting the interior. Four other buildings also burned, but Brownson Hall, the first Washington Hall and Sacred Heart Church were spared.

University President Fr. Corby decided the students must return home, but he promised that they would return in September to an improved Notre Dame.

Four days later, Fr. Sorin, the University founder, returned to campus and walked through the ruins, felt the devastation of the community, and signaled to everyone to enter the church, where he stood on the altar steps and spoke.

“If it were all gone, I should not give up,” he said. “I came here as a young man and dreamed of building a great university in honor of Our Lady. But I built it too small, and she had to burn it to the ground to make the point. So, tomorrow, as soon as the bricks cool, we will rebuild it, bigger and better than ever.”

Later that same day, the students saw Fr. Sorin, then 65 years old, stepping slowly through the ruins of his life’s work, pushing a wheelbarrow full of bricks, getting ready to rebuild.

Three hundred laborers worked 16 hours a day to rebuild the main building in time for classes that fall. They laid more than 4.3 million bricks made from the marl in the lakes. They rebuilt it from the ground up, and when they got to the top, and came to the place where the dome had been, they built one taller and wider than the one before. This one would be covered in gold.

The statue and the Dome