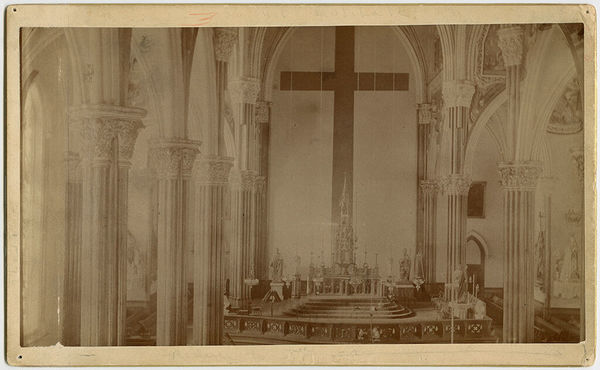 The cornerstone of the current Basilica of the Sacred Heart at the center of campus was consecrated on May 31st, 1871, with six bishops present. Its bell tower is 218 feet high, making it the tallest university chapel in America.

The first plans called for a baroque design at a cost of $100,000, but University founder Fr. Edward Sorin, scrapped those for a Gothic plan that reflected his French taste and desire to build a striking landmark – and keep within his modest budget. The building took 17 years to finish, including the 44 large stained glass windows imported from France, the enormous bells in the tower, and the interior murals completed by Vatican painter Luigi Gregori.

The design underwent many changes over that time, but religious functions and celebrations were held in the unfinished building as soon as the organ was installed. It was finally consecrated by Bishop Joseph Gregory Dwenger on August 15, 1888.