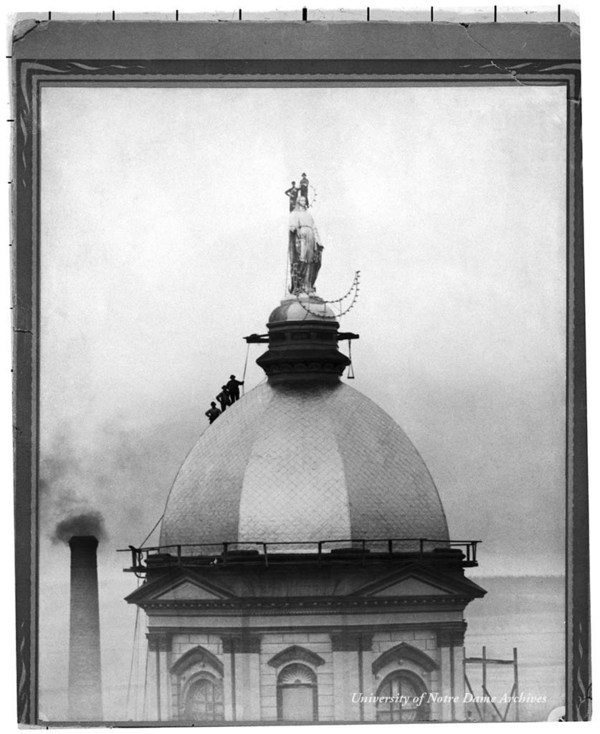 Six years after inventor Thomas Edison successfully demonstrated his electric light bulbs in 1879 by lighting up a street in Menlo Park, N.J., Notre Dame installed his incandescent lights in the corridors and study halls of the Main Building in September 1885. The next month the crown on the statue of Our Lady on the Dome and the crescent at her feet were illuminated. So successful were the first lights that President Fr. Walsh announced a plan the next year to replace gas lighting with electric. The University would build an electric light station to house the dynamos, a motor to power them, as well as resistance coils and various meters.

“The electric light will supersede gas entirely in all the parlors, study-halls, class and lecture-rooms, as well as in the private rooms of professors, and students,” said an announcement in Scholastic on Jan. 9, 1886. “We are sure that all will be pleased with the change, as, from the experience we have already had with the Edison light, there seems to be no doubt left in the minds of any one as to the superiority of the incandescent electric light over gas. It is in every way a cleaner, brighter and steadier illuminant than anything we have yet seen; and, by reason of its brightness and absolute steadiness, it is as easy on the eyes as sunlight itself.”

It’s possible that Notre Dame was the first American college to have electric lights. When a Bowdoin College student wrote to the New York Electrical Review in 1887 that Bowdoin would be first, the publication responded that Notre Dame had had them since 1885.