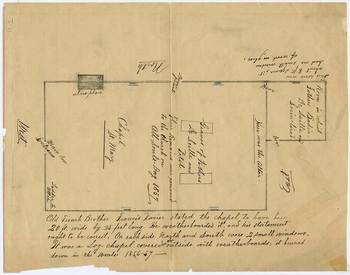 Fr. Sorin’s mandate was both college founder and priest to the 20 or so Catholic families in the area. It was to these Catholics he reached out in January 1843 to help build a new church on the property. The existing log cabin was in disrepair, and too small for services. The area’s settlers responded, and began felling logs for the walls of the structure. The roof was finished in time for spring. Eventually, an addition connected the church to the other existing structure on the premises upon Sorin’s arrival: a clapboard house occupied by the interpreter for the local Native American tribes.

An Outpost and a University