The early academy: A lifetime of learning 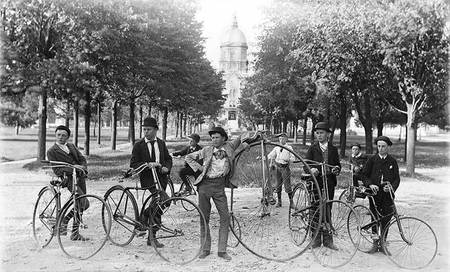 Minims students with bicycles on Main Quad with Main Building Dome in the background, 1892.

For virtually half its existence, Notre Dame was part traditional college, part boarding school. Records indicate that boys as young as 3 years of age attended school here; it was possible for a boy to spend his formative years on into early adulthood at Notre Dame. The school was divided into three divisions: a senior level (for students age 17 and older), a junior level (ages 12-17), and “minim” level (under 12). The departments didn’t have a great deal of interaction with each other, though the younger students did occasionally prove a noisy distraction to the other departments on the small campus. The minims had their own residences (St. Edward’s Hall), even their own sports teams (competing against teams such as South Bend Junior High).

Eventually, Notre Dame became a more traditional university in structure. The junior department ceased operation in 1922, and the minim department was closed in 1929.

The Congregation of Holy Cross in the Civil War